The American Mastodon.  Its remains have been found from Alaska to Florida, New York to California.  Fishermen find their teeth when their nets dredge the ocean bottoms one hundred miles offshore, suggesting that their range was even greater when ocean levels were lower than at present.

Mastodons might have seemed, at first glance, like elephants.  Like modern elephants, they had trunks, and tusks.  But although they were in the same order as elephants, they were in a different genus – Mammut.  Their build differed from modern elephants – they had shorter legs, longer bodies, and were more heavily muscled.  They stood between 7 ½ and 10 feet tall at the shoulders, and weighed up to 10,000 pounds. There is fossil evidence of sexual dimorphism – males were larger, on average, than females. 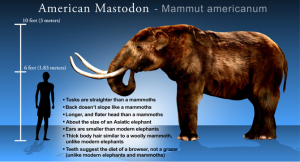 Mastodons had big tusks, up to fifteen feet long.  They were curved, but not as sharply as those of mammoths.  And they were used in combat. They were aggressive. Fossil evidence shows that the males engaged in fierce battles, presumably fighting over access to the females.

And like the woolly mammoth, the American Mastodon had a thick woolly fur coat.

File this in the “betcha didn’t know” category:  “Mastodon” means “breast-tooth,” or “nipple-tooth,” because of the cone shaped protrusions on its teeth.  These suggest that the mastodon diet was largely browse – leaves, twigs and branches from trees, shrubs and bushes.

There is some controversy about their behavior.  Many experts think they lived in herds, probably females and young, much like modern elephants.  Others’ however, think they may have been more solitary animals.

They disappeared roughly twelve thousand years ago, possibly because of climate change, aided by hunting pressure from humans entering the continent at that time.  Archeologists find skeletal remains with Clovis points embedded in them.  Mastodons were hunted.  They are extinct now.

Would have been cool to see one, though.

This are two short excerpts from my novel, The Clovis Mission:

Another valley.  We were in basin and range country, now.  Another stream, and a small lake behind a beaver damn.  Aspen growing.

And then, in the night, in my vision goggles, I saw them. Three of them, browsing on the aspen. Mastodons. Yeah, I know, I should call them Mammut. So sue me.  Much less tall than the mammoths, but built like boxcars, with a long sloping spine from the head to the tail.  No hump.  But long, and wide.  Very solid.  Long, long tusks, but straighter than those of the mammoths. Just browsing in the margin of the woods.  They, unlike the other animals we had seen recently, seemed entirely unconcerned with us. Their small piggish eyes tracked me as I rode past, and one snorted a little, but they didn’t move, either toward us or away.

I surmise that they were m. cosoensis, not m. americanum, because there were only three of them, not a herd, and because they were browsing aspen leaves, not spruce needles.  But so little is known.  Maybe they break up into family groups during the summer.  Maybe their diet changes seasonally, and they take advantage of whatever forage is available at any given time of year.  Maybe they were an as-yet unknown subspecies.

But, oh, what a sight.  So large, solid, rocking a little as they browsed, their trunks curling up and stripping the small branches off the aspens.  Their fur was long and shaggy, but they too, like the mammoths, were shedding their winter coats.

The screaming shocked me.  A huge, high, squalling, screaming blast. It came from up ahead, but our vision was obscured by a grove of trees.  As the three of us rode past the trees though, I saw what had caused the noise.  Two mastodon bulls were facing off, both equally large, heavy, strong, and ready, apparently, for a fight.  Not with us – with each other.  Mating season.  The rut. They were only about ten feet apart.  The one with his back to us was lashing his tail.  The trunk of the other was waving in the air.  Both were shaking their heads from side to side.  Beyond them, in the near distance, several cows stood placidly.

Again the screaming blast. And they closed with one another fast and hard.  They slammed into one another, piston legs driving, slashing and stabbing with their tusks, pushing with their heads.    A cloud of dust arose around them from the impact.  The fight was swift and savage.  Neither backed down for several seconds.  Then they separated, and again smashed into each other. They twisted sideways, each seeking some purchase, some advantage.  And again they separated, and again smashed together.  This time, though one slipped the guard of the other, and his tusk drove into the shoulder of the other.  The injured bull screamed and backed off.  But again they charged.  And again.  And again.  Only the injured shoulder started to tell on the one bull.  He slipped sideways a little.  The other bull was relentless.  He kept pushing forward, slamming his trunk against the other’s, twisting his tusks furiously, trying to find another opening.  And again, he slipped the guard of the other.  This time, though, his tusk drove deep into the chest of the injured bull.  With that, the injured bull had had enough. He backed away, and started to turn, to flee.  But the victor would not stop.  He slammed forward again, into the side of the other bull.  Both tusks drove into the bull’s side, and he staggered, but did not fall.  When the victor backed out, the injured bull moved off at the fastest walk he could.  The victor lumbered after him for twenty yards or so, and then finally relented.  He stood for a moment, breathing heavily, then raised his trunk and bugled another loud cry.  The injured bull walked past the females and disappeared in the woods beyond them.

Fossil evidence shows that mastodons fought, but seeing this battle  – so shockingly raw, and sudden, and real- was a far cry from fossil ribs showing healed fractures.

That’s me, on the horse there.  This is what I saw, twelve thousand years ago, in my ride across country, from where St. Louis now stands, to Arizona.